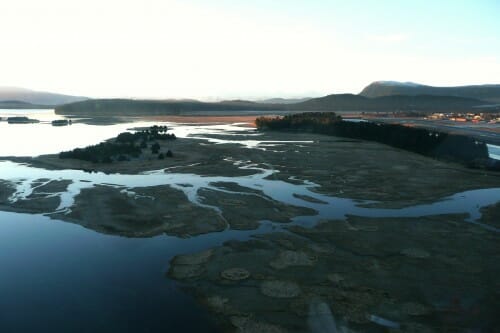 The Mendenhall Wetlands State Game Refuge, situated in the geographic heart of Juneau, is 3,764 acres and encompasses a series of estuaries created by the numerous streams originating in the surrounding mountains. As the tides ebb and flow, the wetlands alternates from grassland to shallow sea. The varying salt conditions produce a diverse community of plants from sedge meadows and beach rye to spruce-hemlock forests in uplands surrounding the wetlands. The complex of vegetation provides resting and feeding habitat for spring and fall migrations of waterfowl and shorebirds. More than 140 species of resident and migratory birds frequent the area as well as nearly a dozen different mammals, eight anadromous fish species, and an abundance of marine life.  The Mendenhall Wetlands State Game Refuge was designated as a globally significant “Important Bird Area” in 2007 by the National Audubon Society.