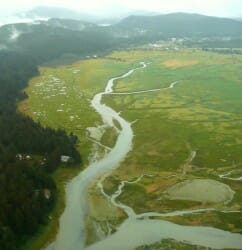 Overview:
The occurrence of accreted lands throughout the northern portion of the Alaskan panhandle provides Southeast Alaska Land Trust with a unique conservation focus. As Glacier Bay glaciers continue shrinking from their Little Ice Age maximum extents of the mid 1700s, as witnessed by George Vancouver, land throughout northern Southeast Alaska is undergoing isostatic rebound, where lowland areas are rising and creating ‘new’ land. The Glacier Bay glaciers were over 3,000 feet thick and 60 miles longer, and heavy enough to depress and in some lowland cases submerge, all of the land in northern Southeast Alaska. Nowhere are the resulting land use issues more evident than around the Mendenhall Wetlands State Game Refuge.

Situated in the geographic heart of Juneau, Mendenhall Refuge encompasses a series of estuaries created by the numerous streams originating from the surrounding mountains. Tidal fluctuations blend water and nutrients as the saltwater wetlands alternate between a shallow sea and expansive grassland. This intermingling of land and sea results in a diverse habitat arrangement supporting a variety of life. The 3,764 acre refuge stretches some nine miles along Gastineau Channel providing vital feeding and resting grounds for both resident and migrant birds traveling to and from their Arctic breeding areas. Within the course of a year more than 140 species of birds, nearly a dozen different mammals, eight anadromous fishes, and an abundance of other marine life inhabit the refuge. Likewise, many people flock to the refuge to share in the scenic bounty.

Land within the Mendenhall Refuge that is tidally influenced up to the mean high-tide level (15.4 ft), also known as the meander line, is protected and managed by the State for its unique recreational and wildlife values. In some areas, State management is extended to the extreme high tide line at 22.7 ft. As the outer edges of the Refuge following the meander line become lifted by post glacial rebound beyond frequent tidal inundation, the Refuge boundary shrinks. The accreted land begins to assume upland characteristics supporting pioneer communities of plants like grasses, fireweed, and eventually first generation stands of young, open growth Sitka spruce. No longer held within the refuge these uplands become available for private ownership by adjacent landowners through a process called quiet title. The underlying assumption behind quiet title is that present-day owners of waterfront property retain the same right to water access as the original owners received at the time the land was conveyed from the public domain.

With land rising an average of a half inch per year in the Juneau area, and low-gradient tidal flats a persistent feature of the Refuge, seaward shifts can total hundreds of feet over the course of several decades. As an example, one local property owner has nearly tripled his original acreage by acquiring accreted land through quiet title, and has the opportunity to increase it eleven fold. With uplifted lands no longer protected as part of the Refuge, Southeast Alaska Land Trust is seeking to work with willing landowners to identify conservation methods for maintaining Refuge values on these special accreted lands. People enjoy not only the animals that accreted lands support, but also the beauty of open space in this region of vertical landscapes.

Location:
The refuge extends along Juneau’s Gastineau Channel from Salmon Creek to Fritz Cove, and is sandwiched between Douglas Island and the mainland.

Area Description:
The Mendenhall Refuge encompasses a series of estuaries created by the numerous streams originating in the surrounding mountains. As the tides ebb and flow, the refuge alternates from grassland to shallow sea. The varying salt conditions produce a diverse community of plants from sedge meadows and beach rye, to spruce-hemlock forests in uplands surrounding the refuge. The complex of vegetation provides resting and feeding habitat for spring and fall migrations of waterfowl and shorebirds. Over 140 species of birds are known to frequent in and around the refuge. Mammals found in the refuge area include harbor seal, Sitka black-tailed deer, black bear, muskrat, land otter, mink, short-tailed weasel, snowshoe hare, porcupine, little brown bat, and long-tailed vole.

The refuge boundary is dotted by numerous private dwellings and commercial developments. Juneau’s airport actually protrudes out into the wetlands, however it lies outside the actual refuge boundary. Just south of the airport, glacier highway borders the eastern boundary edge on the mainland side of the refuge. Currently, the Alaska Department of Fish and Game holds responsibility for the refuge, and manages it primarily for public recreation.