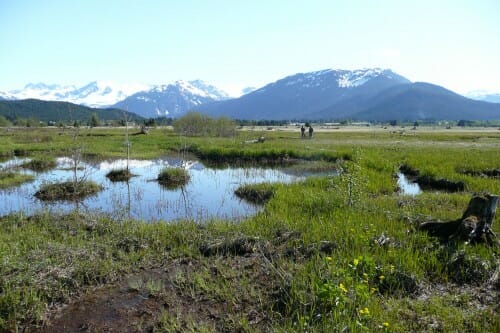 Wigeon Ponds is the first property that the Southeast Alaska Land Trust purchased from upland landowners adjacent to the Mendenhall Refuge under the Accreted Lands Project. Located near Mendenhall Peninsula, the parcel is nearly 6.5 acres of productive salt marsh wetlands with unique fresh-water ponds that provide prime habitat to birds, mammals and amphibians. In The Mendenhall Wetlands, A Globally Recognized Important Bird Area, Armstrong (et. al) claim that Wigeon Ponds are an especially significant habitat area for birds in the Mendenhall Wetlands:

“Wigeon Ponds are Important for several reasons. They are a resting area for Mallards, especially in April and May, when we have counted up to 500 of those birds at a time. They are also important as a feeding area for Canada Geese. We have counted over 100 geese here in June and have documented them feeding on Lyngbye sedges” (2009).

The ponds also support the only known breeding population of western toads for the entire Juneau mainland from Thane to Amalga.

The property was originally a part of the Mendenhall Refuge, which is administratively bounded by the mean high tide line. Yet, due to the slow uplift of land in the area (a phenomena called “isostatic rebound”) the property has, over time, been uplifted above the mean high tide line and is legally entitled to be claimed by the upland landowner. Under the Accreted Lands Project, the Southeast Alaska Land Trust is working with upland landowners adjacent to the Refuge to permanently protect these vital wetlands. The accreted lands near the Mendenhall Peninsula are among the largest around the Refuge, and they are also some of the most important bird and wildlife habitats. Wigeon Ponds is a valuable asset to the protected lands in the Mendenhall Wetlands area, and the Southeast Alaska Land Trust is currently working with several other landowners to continue acquiring lands around the Refuge.