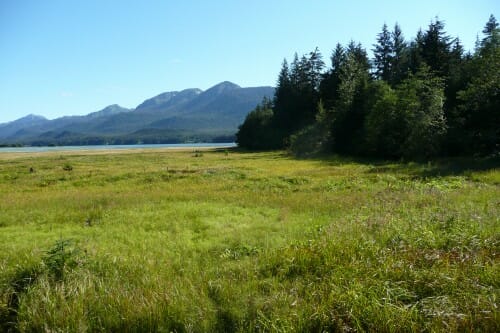 The Sunny Point area of the Mendenhall Wetlands is highly visible and is a heavily visited part of the Refuge, and was at the heart of the movement to create a state game refuge. In his book Attending Alaska’s Birds, local resident James King recounts how conservationists, duck hunters, and resource agencies worked together to help align the new four-lane highway north of Sunny Point, instead of straight through the tide flats, as the engineer preferred. It took 11 years, but with local legislative leadership, endorsement by the FAA and various resource agencies, and support by John Hope, a Tlingit elder, James King’s vision of protection for the Mendenhall Wetlands finally became a reality in 1976.

The Southeast Alaska Land Trust has purchased five accretion parcels (25.75 acres) at Sunny Point where Egan Drive was originally planned to align. The King Easement adds another acre to the protected lands at Sunny Point. Access to the “spoil islands” is gained from Sunny Drive. Important food for ducks and shorebirds is found on the mud flats on the south side of Sunny Point where marine invertebrates are prevalent: amphipods, tiny clams, snails, and worms.

Sunny Point Park is roughly a 14-acre low and high marsh wetland complex located along the eastern edge of Sunny Point. The wetlands lie within the Switzer Creek drainage and are part of the overall Mendenhall wetlands complex. Lyngbye sedges dominate the property, which may be the most important plant for Canada Geese and other waterfowl, according to the Mendenhall Wetlands, An Important Bird Area. Lyngbye sedges also play a role in marine food chains by trapping algae that feed juvenile fish. The property was purchased in 2010 as a part of the Accreted Lands Project, and will remain in permanent conservation status.